Posted at 19:16h in Uncategorized by kathyantar
0 Likes

The shop’s creations for the drama range from the very ornate gold drapes in the Powell’s study to the simple panels in Zoila’s house.  The Sewing Studio’s work can be seen in rooms throughout the show, including the sheers and drapes in many of the characters’ homes.

The Sewing Studio’s drapes play a role in one of the shows most dramatic scenes, when Marisol lights the ones in the Powell’s guest room on fire. 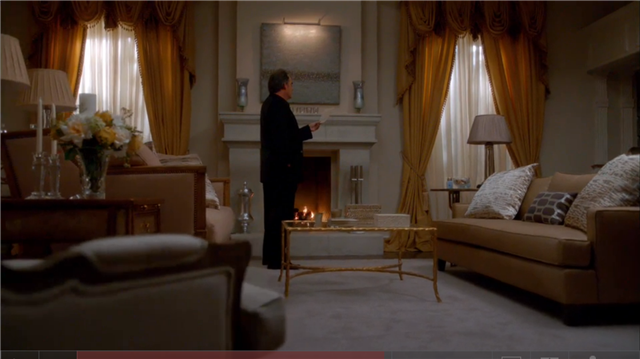 “We love being able to help set designers and art directors bring their creative visions to life,” says Kathy Antar, owner of The Sewing Studio. “In Devious Maids, the drapery in the Powell’s study adds to the extravagantness of a traditional home, while simple panels and sheers compliment the modern houses. It’s a treat to see our handiwork in such diverse scenes.”

The Sewing Studio, located at 5309 Peachtree Boulevard in Chamblee, regularly sews for movies and TV shows filmed here in Atlanta, including The Blind Side, Identity Thief, The Walking Dead and Vampire Diaries.

In addition to sewing cushions, drapery and upholstery for use on set, The Sewing Studio also manufactures back-of-the-house pieces such as reflectors to redirect and filter lighting to sandbags for steadying equipment.

The Sewing Studio not only sews for movies, TV and theater, but also for companies that want their products “Made in America.”  The studio’s 10,000-square-foot shop houses more than 20 industrial-grade sewing machines, a spacious workroom, in-house design consultation and more.